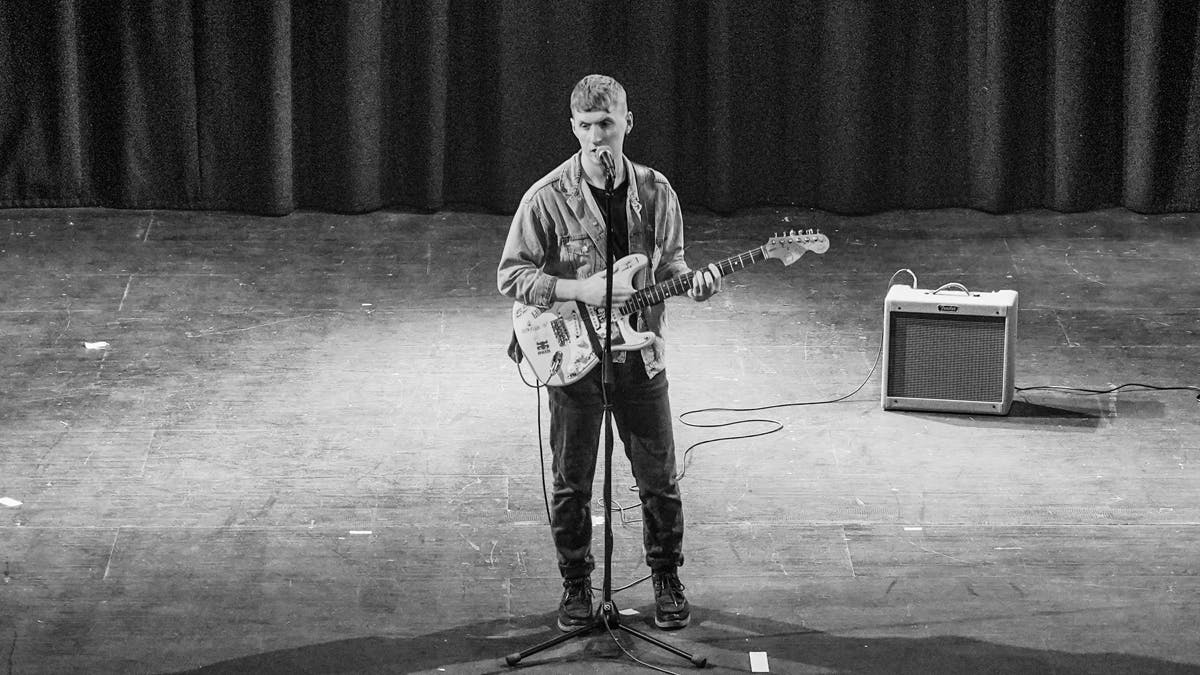 Skip Curtis is an artist, songwriter and record producer from South Wales. He began his music career in a bit of an unorthodox manner by establishing the “fake” band XY&O in 2015 to demonstrate some of his songwriting. This music was picked up by radio stations in the USA and the “fake” band became a real one. Debut single ‘Low Tide’ went straight into Spotify’s Viral Top 10 and DY&O found themselves having a viral hit, with only having played one gig. This trend continued as in 2016 BBC radio chose them to played at Glastonbury – having only played nine gigs at this point, making the biggest music festival in the world their 10th.

in 2019 Skip Curtis began releasing solo material and establishing the record label Pet Shop Records. Skip released ‘Sink Into You’ recently, the final single ahead of his debut solo album ‘Culture Violet‘ due out early in 2021.

Where are you from?
The South Wales Valleys

What do you do?
I try to write songs! For myself and for other artists. I also produce and front the haze-pop band XY&O.

You can make a record with one artist from history, who’s your pick?
Prince, what an icon.

What’s the most unexpected feedback you’ve had to a song or show?
People singing your songs back to you is always a pretty special and unexpected moment. I’ve had that a few times and it’s always such a good feeling.

What’s the best gig you’ve ever been to?
Hans Zimmer at Wembley SSE, that was pretty jaw dropping. Also, Arcade Fire at the CIA in Cardiff on the Neon Bible tour, amazing album and amazing band.

What British music icons inspire your sound today?
I’m a huge admirer of Robert Smith from The Cure. Not just his music, but also his approach to the industry. He is a very self-sufficient artist by all accounts. I’m heavily inspired by the song writing of John Martyn too. I think he had a few demons, and he was not the best ‘person’ in the world at times. But his music has always been a big source of inspiration for me.

You have one hour to spend with a person from history, who and why?
Plato, the philosopher. Apart from his unique perspective of the universe, I think he was also one of the best writers (of words) who has ever lived. I’d like to sit on a little Greek island looking out over the Aegean Sea with him and ponder, maybe share a few olives…

If you could play with any band, alive or dead, who would you pick?
Fleetwood Mac I think. Just to feel some of that sexual tension, or just general tension. The absolute slamming tunes helps too of course.

The first track you played constantly?
Sally MacLennane – The Pogues

A song that defines the teenage you?
Feeling This – Blink 182

One song you would keep forever?
Purple Rain – Prince

A song lyric that has inspired you?
Sweet Little Mystery – John Martyn

A song you wished you had written?
Dreams – Fleetwood Mac

A guilty pleasure?
Life Is A Highway – Rascal Flatts

Last song in your ideal night club?
So Long, Farewell – The Sound of Music

A new band you’re into at the moment?
The Paper Kites