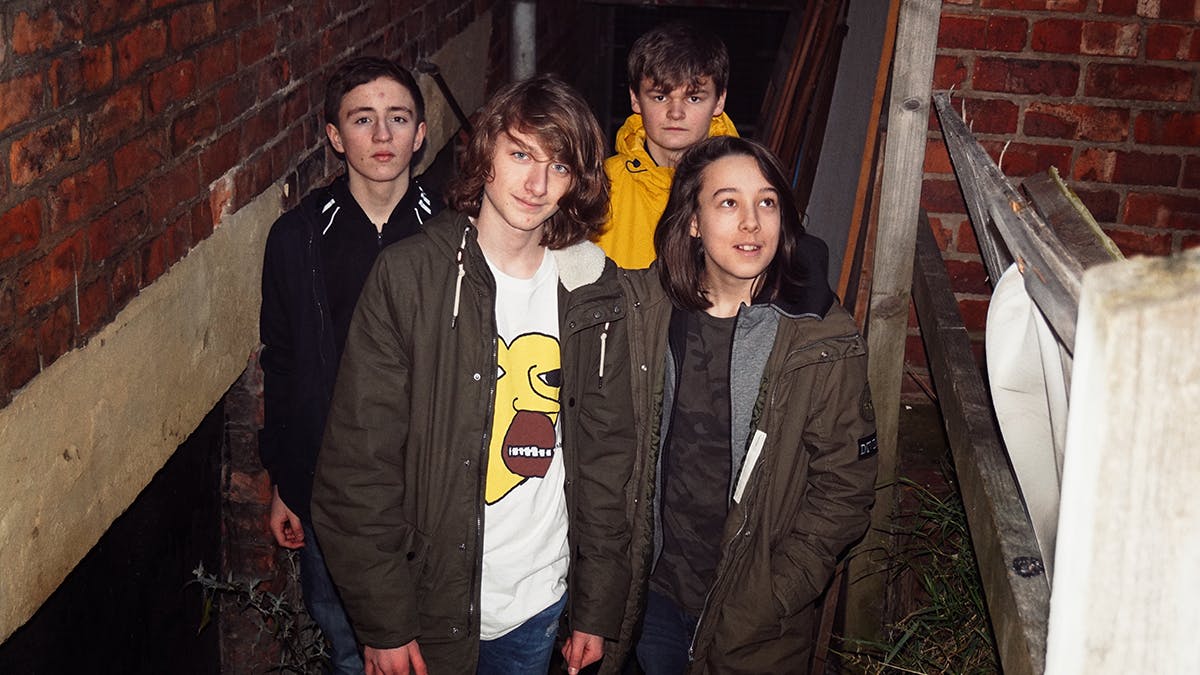 Derailer are a young band from Stockport but a big future ahead of them. Having seen firsthand their incredible live performance and they’re loyal following I can certainly say that Derailer are on the fast track to success. With an electric range of influences they break that standard indie mould to add a splash of punk and 80s rock into the mix to create a brilliant sound that’s ever evolving. From speaking to the band it’s clear to see where these sounds come from and if they carry on as they are they’ll be marking their spot firmly within the Manchester music scene.

Get to know Derailer

Where are you from?
Arthur: Tottenham, Norf’ London (but now live in Stockport)
Luca: Stockport
Sam: Stockport
Will: Stockport

You can make a record with one artist from history, who’s your pick?
Arthur: Yes, because I reckon we could the maddest sounding stuff ever
Luca: Nena (The Band), as I think it’d be interesting to see what goes into making an 80s pop record.
Sam: Paul McCartney
Will: John Lennon

What’s the most unexpected feedback you’ve had to a song or show?
Arthur: I wore round sunglasses and got called “Summer Harry Potter”
Luca: The first time someone said a gig sounded like actual music
Sam: The promoter at a festival told us we were the most praised band there
Will: Someone comparing me to Charlie Watts

What British music icons inspire your sound today?
Arthur: Everything I play on guitar can probably be linked back to David Gilmour, but my top songwriting icons would probably be Lennon/McCartney, Ian Anderson and Roger Waters
Luca: Roger Waters (Pink Floyd), Mick Clarke (Orang-Utan), Sid Fairman (Orang-Utan), Craig Adams (The Sisters of Mercy), Doktor Avalanche (The Sisters of Mercy)
Sam: I wouldn’t say i base my sound off anyone, but some bass players that inspire me are McCartney, John Entwistle and John Paul Jones
Will: The Beatles as they are the best band besides Derailer to walk the Earth

You have one hour to spend with a person from history, who and why?
Arthur: Jimi Hendrix, and ask him how it feels to be the coolest person to have ever lived and how he has influenced all guitarists who have succeeded him
Luca: Carlo Karges, one of my favourite musicians, inspired a lot of my playing style and been involved in lots of different albums, artists and bands I’d love to know more about
Sam: I think Bob Marley to see what he’d think about the world today and hear stories he has to tell
Will: I’d have a few beers with Gandhi because he seems like he’s up for a good laugh

If you could play with any band, alive or dead, who would you pick?
Arthur: Jethro Tull
Luca: Tomorrow’s Gift
Sam: The Specials
Will: The Who

A song that defines the teenage you?
Arthur: Dogs – Pink Floyd
Luca: Jung Wie Du (12” Version) – Nena
Sam: A Certain Romance – Arctic Monkeys
Will: I Am The Resurrection – The Stone Roses

One song you would keep forever?
Arthur: The Revealing Science of God – Yes
Luca: Castles Made of Sand – Jimi Hendrix
Sam: Slide Away – Oasis
Will: Champagne Supernova – Oasis

A song lyric that has inspired you?
Arthur: “Words are flowing out like endless rain into a paper cup, they slither while they pass they make their way across the universe” – Across the Universe (The Beatles)
Luca: “I hear silence, I hear silence in my heart, From a distance, Turn your back and run from me” – 586 (New Order)
Sam: “They’re doing nine to five and moaning, And they don’t want you succeeding when they’ve blown it” – Stay Positive (The Streets)
Will: “Turn off your mind, relax and float downstream” – Tomorrow Never Knows (The Beatles)

A song you wished you had written?
Arthur: Thick As A Brick, Part I – Jethro Tull
Luca: 2112 – Rush
Sam: Bohemian Rhapsody – Queen
Will: A Day In The Life – The Beatles

A guilty pleasure?
Arthur: Hocus Pocus (Extended Version,of course) – Focus
Luca: Living a Boy’s Adventure Tale – a-ha
Sam: Who’s That, What’s That – Niko B
Will: Anything by The Spice Girls

Best song to turn up loud?
Arthur: When The Levee Breaks – Led Zeppelin
Luca: Walk Away – The Sisters of Mercy
Sam: Money – Pink Floyd for the guitar solo
Will: Anything by The Specials

Last song in your ideal night club?
Arthur: Friday I’m in Love – The Cure
Luca: Funkahdafi – Front 242
Sam: I Am The Resurrection – The Stone Roses
Will: Town Called Malice – The Jam

A new band you’re into at the moment?
Arthur: Greta Van Fleet – with my favourite of theirs being “Edge of Darkness”
Luca: LOOK MUM NO COMPUTER with favourite song being “Damage is Done”
Sam: I really like Monks from Liverpool
Will: Probably Monks, but I think too many bands around today sound the same and are trying too hard to be “indie”