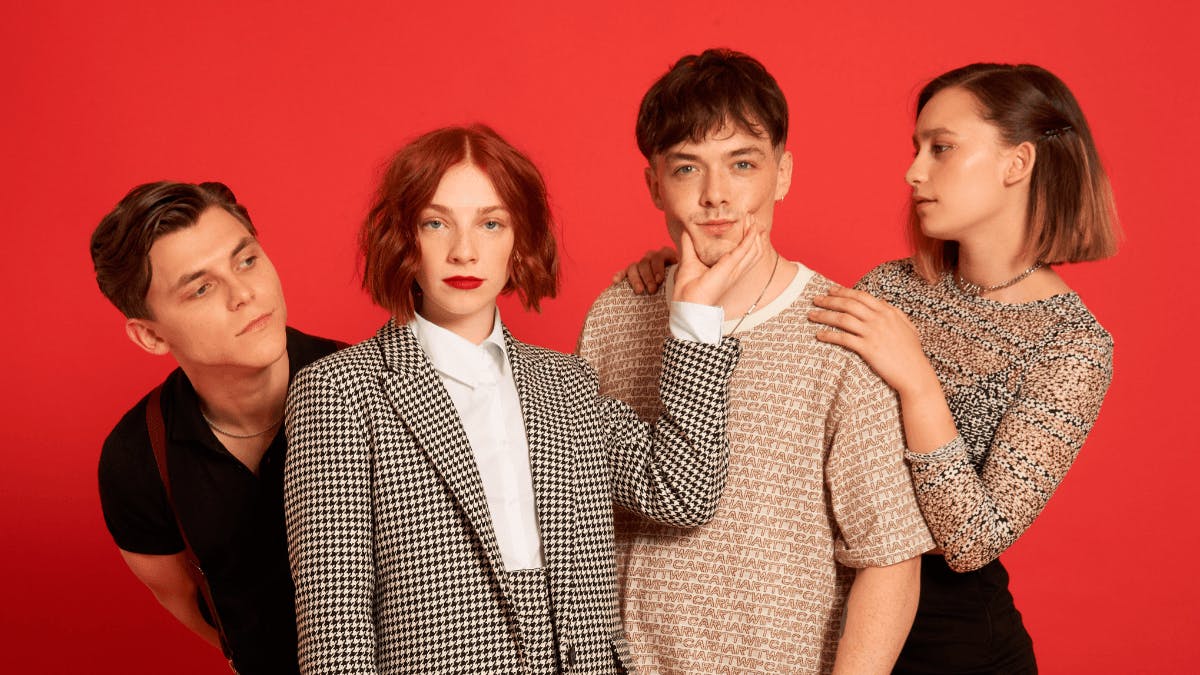 Sophie and the Giants are bringing a fresh new stance of left-leaning pop with a vast array of influences from the likes of Siouxsie to Blondie and Jamie T. The band was formed by Sophie (vocals), Chris Hill (drums), Bailey Stapledon (bass) and Toby Holmes (guitar) while all four of them were still in college before moving to their adoptive home in Sheffield where they’ve been honing their skills and developing their own unique style. They’re incredible set of songs and mesmerising live show has taken them on tour with the likes of Tom Grennan, Yonaka and Reverend and The Makers.

The pop quartet are back with a huge helping of electro-pop, buoyed by Sophie’s rapturous vocals and catchy synth riffs with their latest release ‘Right Now’. The song is a nod to the good times we all miss, but know they’ll come back, with a sense of freedom and joy designed to lift people stuck in a slumber.

“In a time where we feel lost and stuck in an endless cycle, we want to feel those real-life highs again and we want it now more than ever” Explains Sophie. “’Right Now’ is a song about the frustration we’re all feeling, about how we want to be let loose upon the world again. We hope wherever people are this will give them the feeling, if only for a moment, that anything is possible again”

Sophie and the Giants have created a pop a masterpiece with this track, with a brilliant dance feel to it that will lift any spirits and have you dancing and singing along. The band has a brilliant knack for writing an entrancing chorus which will live in your head for days after hearing it. The different layers of ‘Right Now’ appeal to everybody from the catchy chorus, to the dance beats to the gradual build ups and drops perfectly structured within the song.

‘Right Now’ isn’t the only masterpiece that Sophie has wrote recently, alongside her co-writer for ‘Right Now’ (Mike Kintish) they collaborated with Tino Schmidt, aka Purple Disco Machine, to create the song ‘Hypnotized’ – now certified as one of the biggest pan-European hits of 2020.

‘Hypnotized’ has racked up triple platinum status in Italy, platinum in Poland & gold across a further 7 countries in Europe, being streamed a incredible 200 million times along with reaching 2 in the European Airplay Charts.

The experience of becoming a bona fide pop star in Europe during lockdown is a surreal experience for Sophie. Going from her flat in Sheffield to performing for Power Hits Estate 2020 in an empty Coliseum in Italy is not something anybody would have been expecting.

“To have had that success with ‘Hypnotized’ during a standstill year has been a blessing for us, we owe a huge thanks to Purple Disco Machine for having us collaborate with him!” Sophie says. “We also hope it’s given people some positivity during a difficult time, just like it has for us. We are so grateful for all the love we have received and excited for what’s coming next.”

Sophie and the Giants have set the ball rolling again in 2021 with ‘Right Now’ and rebuilding the hype and admiration they has in 2019 when they were invited to play Radio 1’s big Weekend, as well as Glastonbury and Reading festivals. The band have said that as soon they can they’ll be returning to the live arena and performing for us once again.