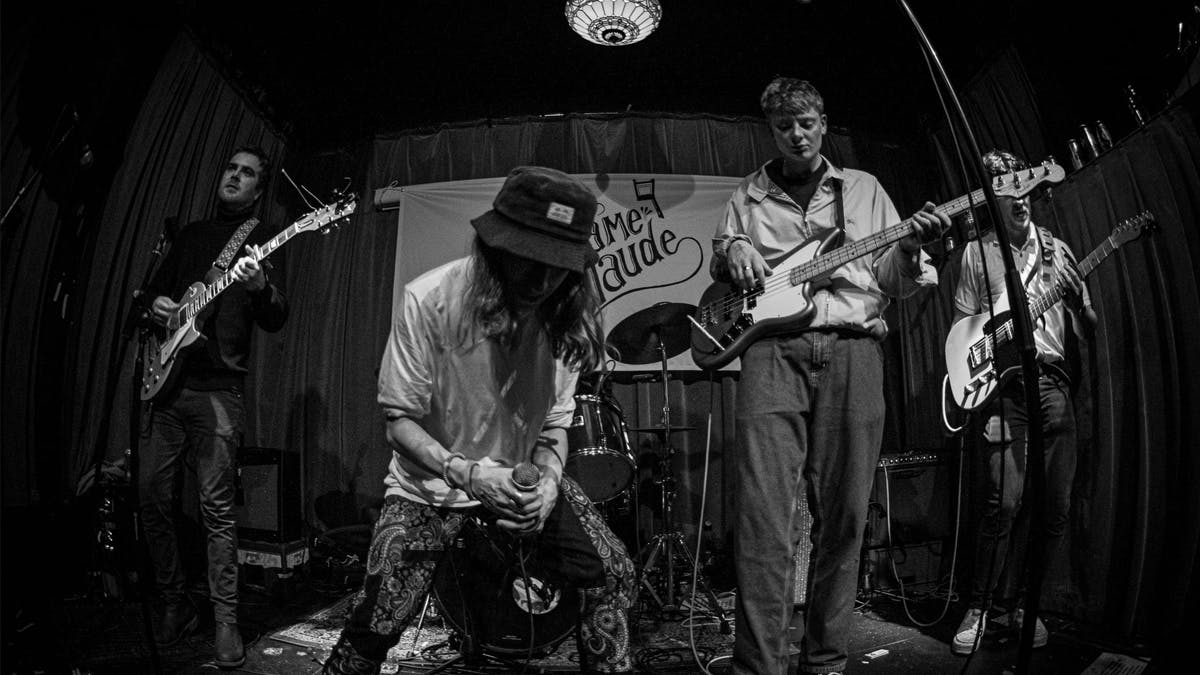 Following a spate of rowdy gigs across Liverpool and Manchester, including a sell-out show at YES Basement, Madame Claude finally earnt their place at the top of the bill on March 18th, stepping up to yet another sell-out crowd eager for an earful of their Ska inspired rhythms.

The venue was Gulliver’s, a classic starting point familiar to many bands past and present; a building steeped in a long history of hopeful debuts, with its lively upstairs room having played host to droves of new bands with dreams of rock and roll stardom, of which The Claude were merely the latest. Yet this didn’t daunt the Manchester-based fivesome. Like so many others before them, they were confident in the knowledge that they have something no one else does, and after the night they just had, you’d be inclined to believe them.

They carried their confidence onto the stage with youthful gusto, the lead singer Frank bouncing about in typically boisterous fashion, clad in a vintage medley of psychedelic sportswear seemingly at odds with the other member’s more casual colours and styles. He greeted the bellowing crowd with raucous encouragement, and without further ado, they plunged into ‘Vision of Health’ – a song that encapsulates both Franks comedic spoken-word style and the band’s distinctive ska beat, reminiscent of The Specials or Selector. The twanging riff and groovy base instantly had the crowd moving their feet as Frank told a tale of reprobate lads relishing their unhealthy habits…

Because we’re your favourite type of arseholes!
We do it in style
To us the thought of all that sport should be put off for a while,
We just ain’t got the minerals
Nothing but an unfit pair of criminals.

The following two songs went by in like fashion, with gathering energy expended by crowd and band both. It was already looking like one for the Gulliver’s history books. The boys were soon easing into one of their best-loved live tunes: ‘Billy the Kidd’, an alt-rock anthem that, despite deferring slightly from their usual sound, displays their wider musical range as well as belying alternative influences like The Clash and The Fall. The crowd hit a peak, pushing and shoving violently while Frank declared over the din that he was a liar, a backdoor tryer; ‘I am Billy the Kidd!’

Many of the band’s lyrics express thoughts and experiences of a listless yet carefree youth, often referring to such elements of popular culture as memes, recreational drugs, and football on a Monday night. These things might seem random or irrelevant to some, but they’re celebrated by Madame Claude for being a unifying part of the young experience. Their take provides a joyful, unapologetic voice for Generation Z.

And the crowd were lapping it up. With every tune, the dial went up another notch. In ‘Danny Went Away’, lead guitarist Micky Strings displayed his Wah peddle finesse through an otherworldly hook that the Grateful Dead’s Jerry Garcia would be proud of. This sort of experimentation is essential to Madame Claude’s unique sound, which, along with the revival of a hitherto unfashionable musical style in Ska, makes them one of the most exciting bands currently on the Manchester scene.

They brought their set to a close with a new tune: Call me the King, a honking melodica-driven stomper with typical catchy melody delivered at that quick “Ska” tempo that coaxes the crowd into mania, bopping under the purple-green lights like skinheads with too much hair.

Of course, they followed with another tune, finishing with their debut single, ‘Threw it Away.’ But you’ll have to wait for the Spotify release in April to hear that one. Only then will you understand the chaos of the gig’s crescendo.

Needless to say, their first headline slot was a resounding success, and whether it’s their first or last, no one can take that away from them. Gullivers may have just witnessed the start of something very special indeed.

Written by Patrick Bell
Photo by Trust A Fox